skip to main | skip to sidebar

I talked about safety and connection in my last post. If ever there was an individual that embodied what I'm talking about in regard to safety, it's Marcy. Magic happens when David is on her table. It is eloquence. And fun. I'm not sure I've ever thought of those two things at once, but that is what happens.

Let me go back to the first visit we had with Marcy in August 2012. And I say we, not just David, because it really involves everyone around him.  We are all witnessing neurological connections being made. With a special needs child, something that seems tiny can be a big deal. This visit was before I started training to become an ABM practitioner, and the thing that struck me was the communication happening between David and Marcy. I listened to her tell David the things he was doing and the movements he was making that were necessary for rolling, sitting, or many potential other movements.

When I laid him down on her table that August, he immediately wanted to arch, roll, go! He was fervent about it. And Marcy talked to him, and let him know that she would give him a signal for when it was time for him to do what he was trying to do. Then she continued to notice things about David. I didn't know what she was seeing, but I knew that David was changing because I witnessed it. This was the first time he touched his feet and hands together. He had the option to turn his head toward the person we wanted to pick him up at the end of the lesson. Awareness was happening. Anat describes it in "Kids Beyond Limits" as "awaring." Not only was David awaring, so was I.

Since then, there has been communication between David and myself about suctioning the trach. I will say where I am going to suction (mouth, nose, or trach) before I do it. When he starts to swing his arms or arch, I now have ways to let him know to slow down. I tell him "easy arms," or "easy legs" and gently put my hands on his thighs to bring his attention there.

I am thrilled that we are here again. I imagine all the neurological connections that have been made since his first movement lesson and how they continue to multiply. The language that occurs is fascinating. And David is listening.  His eyes are alert, and he is responding vocally and physically. I imagine what it is like to be him and feel what he feels. If you can walk and you can talk, and if you can go where you want to and look where you want, it is easy to not consider these things regularly. But witnessing David on the table reminds me to notice them. The more I notice about David, the more it broadens his potential because I can bring these things to his attention. Marcy has a gift of noticing.

For example, she brought David's elbows to his attention. Not only is he becoming aware of them, so am I. Usually, David's arms are stiff and straight. Occasionally he will bend them. Marcy created an opportunity for enthusiasm by telling David he was really good at hiding his elbows. When his arms are  straight, the elbows are hiding. When he bends his arm, we can see them.

As we go about the city, I take moments to play elbow peek-a-boo with David. Guess what. He is bending his elbows more. Now he is playing with them and learning new things to do with them. Like elbow his brother, or bang on the floor. Or push his hand onto a surface. Or put his arm on his mouth. Or push himself up when I am holding him.

I have been using the word "new" to describe the things that David is doing. There is a newness to David that can also be seen in his pelvis. According to Merriam-Webster dictionary, one of the definitions of new is "recently born, built, or created." Since David's injury, not much has been happening in regard to his lower body. Marcy is showing David how to create his own movement.  He moved his pelvis intentionally during one of his first lessons this week. Marcy held his arm as he came to his side and gently guided his pelvis, bringing his awareness to it and letting him know that he could use it--move it--to roll to his side or to roll from his side to his back. 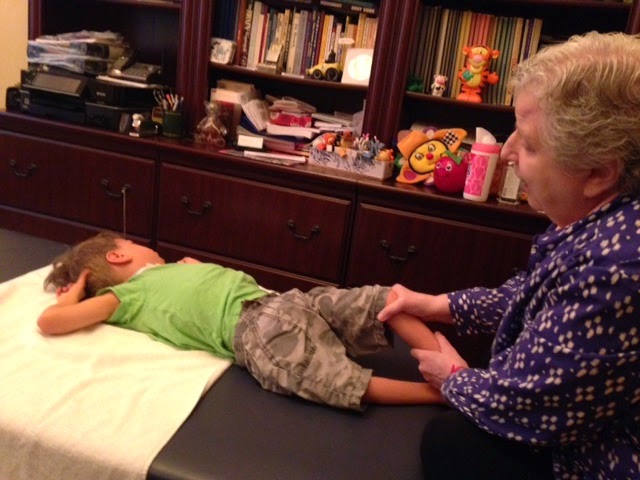 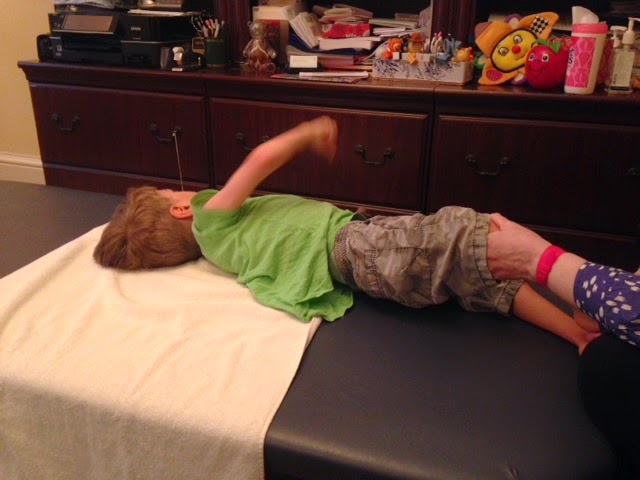 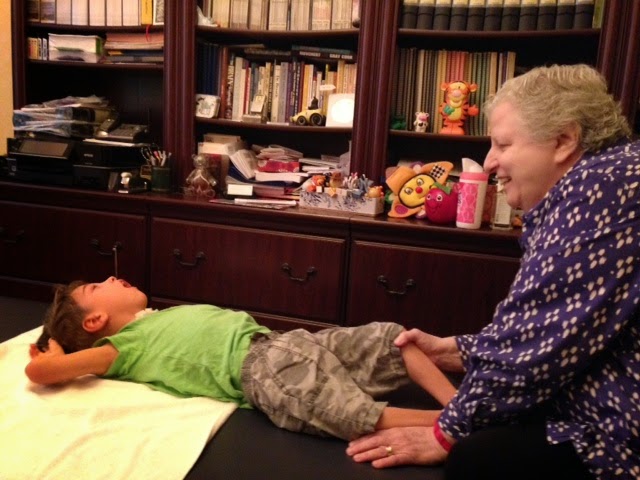 When I picked David up off the table after a lesson, I felt him intentionally roll his pelvis toward me. He knew where he was going and how to get there. David notices. And then he can DO it. He is doing it! He is rolling. He  is moving his eyes. He is smiling more and more. He is holding his head in a neutral position more often instead of turned to the left and tilted back. Today, Marcy was giving David the feeling of standing. Doctors and therapists have recommended putting David in a stander and I have never done it. The reason is, I don't feel the restraint of a standing contraption is worth the weight-bearing input that he'd get out of it. So much of him would be limited. In a movement lesson, like the one he had with Marcy this afternoon, he got a superb quality of weight-bearing information. This quality came from a practitioner who is able to communicate to David an increasingly refined differentiation. There is a pelvis. There are legs. Two of them! He is beginning to feel different ways that weight can be transferred through them. And because his whole body is free when this is happening, he can feel safe. He can put his legs in new positions and create his own movement. Before it was time to go today, I stood up and took a look at him from another angle. I can't find words to describe it. I just know what I felt. I saw David. I saw him being David instead of being stuck, limited.


There are so many things I want to ask him. I do ask him some things, but I also try to give him space to explore.

Let me tell you, David is an explorer. He listens. He tries different things. He explores in subtle ways and not so subtle ways and learns from it. The more he gets the subtlety, the more differentiation he experiences. The ABM practitioner guides the exploration. I'm so thankful that David has Marcy as one of his guides.

I see my son doing these things with the utmost sense of newness and excitement, and I get all emotional. It's intense. And it is liberating. 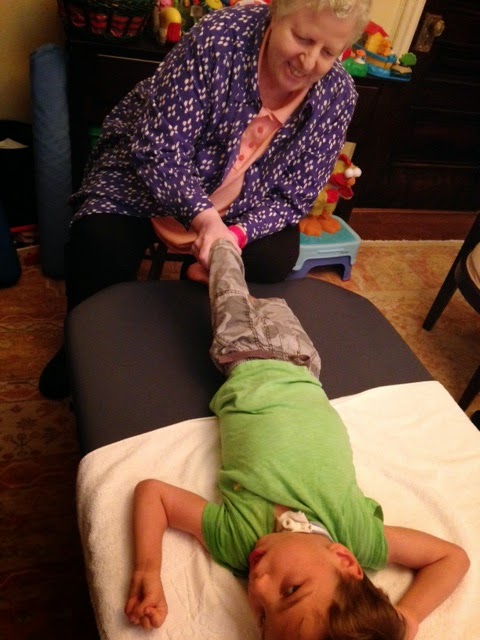 Welcome to the Jones family blog. Jeremy and I have been married ten years. In September 2008 our boys, Donnie and David, were born. Join us on our journey as we grow, change, and endeavor to bring David to recovery.

David is the toughest guy I know. He was born healthy, loud and screaming six minutes after his brother. On his third day of life, he aspirated while in the NICU and went without oxygen for a significant amount of time.
His diagnosis is Hypoxic Ischemic Encephalopathy. He has a tracheostomy because his vocal cords are paralyzed, making breathing extremely difficult. He also has a feeding tube as his injury has left him unable to swallow.
We are so proud of our "Bids" and truly appreciate your continued thoughts and prayers for his recovery.

Dark and Light: A love story for babies